All bases are subject to inspection or investigation by admins at any time. We periodically inspect bases at random.

Restricted building areas no-build zones will not allow you to place a flag. If you can place a flag, you may build in that location. Admins have the right to change no-build zones at any time. You will be assisted in relocating should this happen. Building outside the map is not allowed. You may build on water. If your base is built entirely on water, the water should be considered "land" or the "ground" where other base building rules apply.

No base may block a road if that road is a passage route or a road leading to a compound or something of significance Some Roads lead to nowhere or a group of broken shacks. These roads may be blocked. Bases can be built over a road as a checkpoint-like base, but ALL land vehicles must be able to pass freely beneath constructions with no obstacles blocking their route.

Flagpoles and gear storage must be placed in an accessible position. Flags and gear storage cannot be placed inside of rocks, containers or in any position where another player cannot access, steal or raid the object. Flags must be accessible from ground level, this means the player must be able to start from the outside of your base on the ground and make it to the flag without having to use a helicopter etc. to get into the flag room and get out the same way without difficulty.
At least one side of the flag MUST be a wall or door from Exile Mod or they must be the Brick/Metal equivelant from Extended Base Mod. Other Extended base mod items can be used for the rest of the construction. If building an ocean base, flag must be above water level, and have a floor under it at all times so that it is able to be stolen if raided. No objects may be placed directly on the flag or placed in such a manner that makes it impossible to steal or hack the flag.


Good Examples for Flag Rooms and space around storage containers: 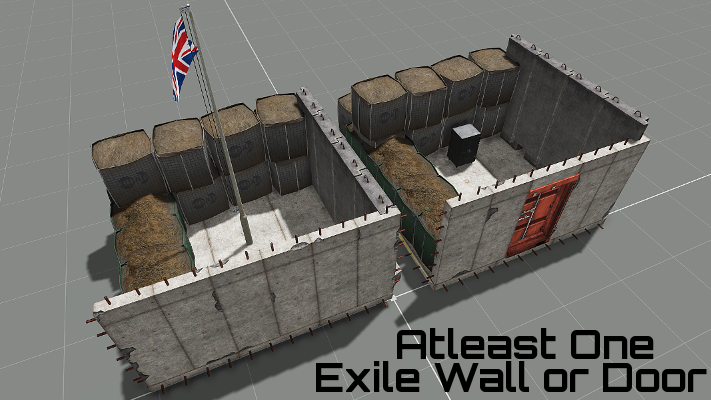 There must be a space around the flag or containers (1x1 box recommended) With a maximum of 4 walls OR 3 walls and a door as the flag room. - DO NOT place any object(s) on the flag or container(s). You may use Extended Base Mod items, however, at least one side of the box must be made of Exile walls or doors. There will be no layering/stacking of walls.


Good Examples for Flag Rooms and areas to put containers. 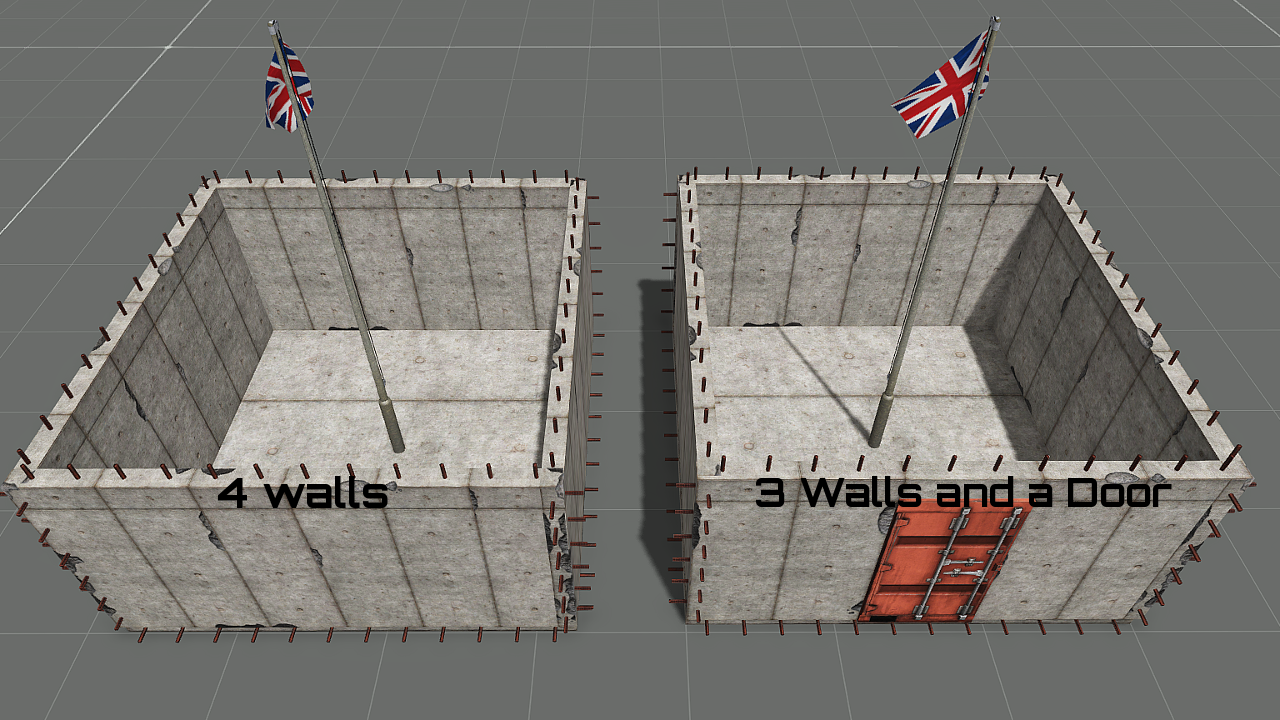 You may also use less than this. You can use 3 walls if you wish, one side MUST be an Exile Wall or Door.

Each base MUST be built with a "Raid Route" installed into the design. This means that one side of the flag room MUST be reachable from the outside of the base via a maximum of 2 walls with the flag room's wall counting as the 3rd wall to the flag. Thus in total, a player should be able to steal your flag by blowing/grinding their way through 3 walls/doors.


Example of how many walls to a flag. 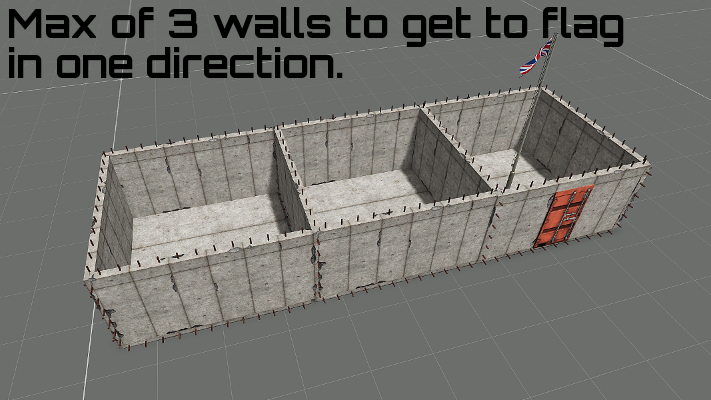 You can also create a snakey maze type of route to your flag in between other build objects. 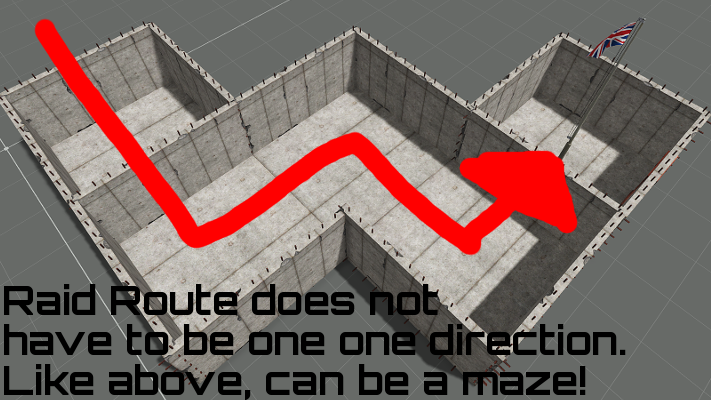 Sky-bases are NOT allowed. Bases have to be accessible from the ground.

Bases built near trader/safe zones must not engage players, vehicles, or aircraft attempting to leave/land at the trader/safe zone. Basically, if you choose to build close to a safe zone, don't camp it. An admin will delete it with no compensation for repeat offenses.

A Height restriction has been hard-coded into place. Those found to be abusing the game to enable their base to be higher than allowed, will have their base parts deleted that exceed this height. There is some leniency and is down to admin discretion.

Must not be racist, homophobic, advertising, or related to restart notifications! Territories deemed offensive will be renamed or fully removed. You must also give your base a name. Do not leave it blank.

Under no circumstances are you allowed to remove base parts that would make either your flag, or your storage unraidable/unhackable while your base is being raided.

If you wish to remove or relocate your base, you can either wait for it to expire or pay to have your base moved. It will cost you 150k PER LEVEL. We will NOT be giving you the money to bring your flag back up to the level it was at. This includes deleting or packing all contents into a box. Your current flag must NOT be stolen, otherwise we won't move it. If we pack the base, the box is given to you and if you lose it, it's not our problem.

Towers/buildings/Large Objects from EBM will NOT be used to surround your base or make up your entire base and/or used as entire walls or make it inaccessible in any way. Large Objects from Extended Base Mod (Base ArmA buildings placeable in Exile) must be placed at ground Level. Use Cargo Containers for what they are supposed to be used for.
Please also note that the following buildings are limited to 1 per base.

You must not build rooms to sit your Tanks/Other armed vehicles inside of so that you can shoot at people without them being able to shoot back at you. You must *NOT* have a roof over your tank when using it at your base.

One base per real life person, per server.

If you are using and paying for friends' bases, and this friend does not play our server anymore or it is infact a second account of yours, and we have reason to believe either of these things to be true, we reserve the right to remove any extra bases you are using.

Please refrain from having base cameras floating in mid-air.

When prompted to pick a design for the flag, please pick one.

If your base is built entirely on water (not touching land), then you must provide a ramp or platform to which players can stand on without having to swim. This platform MUST be used as part of the Raid Route. You can have muliple to distracet from the raid route but you must have it set up in such a way that allows people to stand up and hack/grind/blow their way into the base, should they choose not to use Diving Gear.

Should you have any issues or queries with our rules, we advise that you ALWAYS take it up with an Admin either in TeamSpeak or Discord. And remember, the Grey areas are NOT for hiding in and Admin Discretion is in force here. What ever the Admin's decision is, that decision is final. Do not attempt to seek advice from another Admin after verdicts have been made.